Believe me, I don’t like it any more than you do. I find Donald Trump’s success in the GOP primaries exasperating and depressing. I haven’t written about it very much because I don’t like to think about it very much. I changed my mind when he announced that he thinks we should ban all Muslims from entering the country. The Hill reported:

Trump, in a formal statement from his campaign, urged a “total and complete shutdown” of all federal processes allowing followers of Islam into the country until elected leaders can “figure out what is going on.”1

This was very, very far from the first ignorant/crazy/fear-mongering thing that Trump has had to say during this campaign, and I am sure that it will also be far from the last. Up until this point I didn’t see much point in writing about them. If I wrote a blog post every time Trump said something execrable,  I”d never write about anything else.

But that one was just so egregiously bad that–much as I dislike bandwagons and outrage porn2–I made up my mind to go on the record with exactly what I thought of his proposal.

I am a Mormon. My people understand what it is like to be targeted because of our religion. Some of my ancestors survived the massacre at Haun’s Mill, our prophet was murdered by a mob, and in 1838 Missouri Governor Lilburn Boggs issued an executive order which read, in part, “The Mormons must be treated as enemies, and must be exterminated or driven from the state if necessary for the public peace.”3

So, as a Mormon, I’m sensitive to issues of religious persecution. We’ve been there. We didn’t like it very much, and we don’t think anyone should have to go through it. That’s more than just a matter of bad historical experience, however. For Mormons, religious pluralism and freedom of conscience are matters of doctrine. The 11th of our Thirteen Articles of Faith states:

We claim the privilege of worshiping Almighty God according to the dictates of our own conscience, and allow all men the same privilege, let them worship how, where, or what they may.

After I had already started work on this blog post, I was incredibly happy and proud to see that my Church, which doesn’t often weigh in explicitly on political matters, had found Donald Trump’s statement worthy of formal, public repudiation. In a short, pointed press release the Church quoted Joseph Smith:

If it has been demonstrated that I have been willing to die for a “Mormon,” I am bold to declare before Heaven that I am just as ready to die in defending the rights of a Presbyterian, a Baptist, or a good man of any denomination; for the same principle which would trample upon the rights of the Latter-day Saints would trample upon the rights of the Roman Catholics, or of any other denomination who may be unpopular and too weak to defend themselves. It is a love of liberty which inspires my soul — civil and religious liberty to the whole of the human race.

They also found an ordnance from Nauvoo4 that specifically mentioned Islam in the context of religious freedom:

Be it ordained by the City Council of the City of Nauvoo, that the Catholics, Presbyterians, Methodists, Baptists, Latter-day Saints, Quakers, Episcopals, Universalists, Unitarians, Mohammedans [Muslims], and all other religious sects and denominations whatever, shall have free toleration, and equal privileges in this city …

Additionally, I’ve been very proud of Utah Governor Herbert for being the only Republican governor in the nation who has refused to bar Syrian refugees from entering his state. I thought I couldn’t be more proud of Utah then when Bill Clinton came third in 1992, but they’ve topped it.5

So that is what I think of Donald Trump’s suggested policy on banning Muslims: don’t. And that pretty much sums up most of my responses to his policy proposals. Since I’m writing about Trump now–and since I hope to do that as infrequently as possible–I might as well include some related notions.

Trump’s apparent dominance of the GOP race is very misleading, according to Nate Silver.6 He made his view clear in November with: Dear Media, Stop Freaking Out About Donald Trump’s Polls. His main point was that primary polls have very little predictive power (which makes them quite different from general election polls), in part because so many voters are undecided until the last minute. Once you include the undecideds, for example, the poll numbers look more like this: 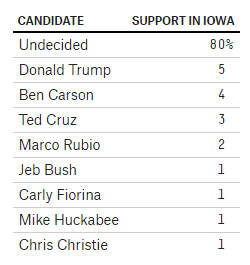 I had some fun with that 5% number by contrasting it with a report from Public Policy Polling about American opinions on various conspiracy theories. In ascending order, here are the conspiracy theories that have at least as much (or much more!) support among Americans than Donald Trump currently does among GOP voters:

In case you’re curious, basically all conspiracy theories have more support among Americans than Donald Trump does among Republicans. In fact, there was only one conspiracy theory that had less support than Trump. That was one the one about “shape-shifting reptilian people” who “control our world by taking on human form and gaining political power to manipulate our societies.” It came in at 4%. And that one isn’t even a real conspiracy theory! It’s just a 1980s TV miniseries.9 The primary difference is that, for example, Bigfoot believers don’t attend boisterous rallies and wave signs and get massive, wall-to-wall coverage.

So, writing back in November, Silver said flatly that although Trump’s chances are more than 0, they are “(considerably) less than 20 percent.” Harry Enten (also writing at Silver’s FiveThirtyEight site), took up the issue again on Dec 4: Donald Trump Won’t Win Just Because More Voters Are Paying Attention. Enten was rebutting a theory that–because more voters are paying attention to this primary season–the polls might be more predictive than usual. His response? “The hypothesis is possible, but there’s no evidence to support it.” The FiveThirtyEight gang weighed in again on Dec 8 in a group chat: What If Ted Cruz Wins Iowa? Although the talk wasn’t specifically about Trump (obviously, from the title), they did mention some interesting data points. The conversation starter was this:

A Monmouth survey came out yesterday showing Ted Cruz leading in Iowa — the first poll to show Cruz atop the GOP heap there. And overall, Cruz has crept into second place in the RealClearPolitics Iowa aggregate.

Nate Silver himself pointed out that, although it’s still possible for Trump to pull out a win in Iowa, his chances of bringing home the nomination are slim.

We’ve been saying for months that Trump could win Iowa or another early state. What we’ve said is that he’s quite unlikely to win the nomination. And he’d still probably be an underdog conditional on winning Iowa, although that depends on a lot of things.

Silver also conceded, however, that if Trump pulls off a win in Iowa, “that’s an epistemological game changer.”

So, I doubt Trump wins in Iowa. If he does, I doubt he wins overall in the nominations. There’s no way he wins in New Hampshire, for example. If he does win the race, I still very much doubt he has a majority, and that means we have a contested convention. Instead of just corronating the nominee, which is what most DNC and GOP conventions are about, the GOP convention would actually be a political fight to the death to see who wins the nomination, and I doubt Trump survives that. Even if he passes all these “I doubt it” moments, the reality is that the Republican establishment will not accept him as the nominee, period. If he somehow walks away with the nod, then the Republican Party will run Mitt Romney (or someone else) rather than allow Trump to run uncontested. Make no mistake: Hillary Clinton wins in that scenario so it’s all symbolic, but the GOP will not accept Trump ever. Not after his remarks about banning Muslims from entering the US. That was the final straw for the establishment GOP.

2. What Does Trump Mean? How Did We Get Here?

There are basically two options that matter to me here. Either Trump’s fear-mongering is a genuine reflection of the GOP party, or there is some other explanation for his rise.

Clearly, I’d like to believe the latter. The fact that Trump is only polling at 5% (once undecideds are accounted for) combined with the fact that you can basically find 5% of Americans to poll in favor of any given wacko conspiracy theory makes this plausible. I would also add that a lot of Republicans view Trump as a way to lash out after decades of being pilloried as bigots. There is a very large degree of self-righteousness in left-wing condemnation of the right before and during Trump’s rise. Let me give you one example of this. Here’s a Facebook status from an individual who attended the same high school that I did: 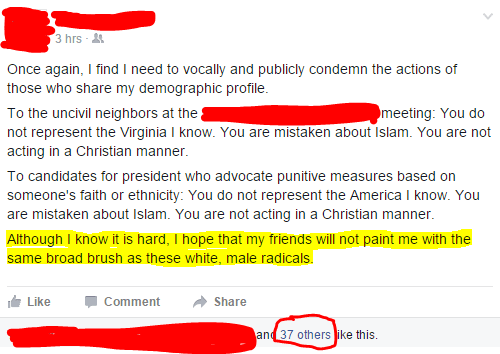 In this case, he was responding to some particular incident in Virginia (I don’t know which) that seems pretty analogous to Trump’s statements. So, I agree with his stance against religious bigotry.

But look at that last, highlighted sentence. Somehow in the space of just 4 paragraphs he manages to make an attack on his Muslim neighbors about him. The mind boggles.10 And yet, on the other hand, this is what an awful lot of the criticism of the GOP looks like to me (and to other conservatives) going back for as long as we can remember. It’s ostensibly about standing up for minorities, but somehow in the end it ends up as a self-righteous ego-trip for the upper-middle class more often than not.

In short, there’s a mixture of immature backlash from the conservative base and also a kind of “boy who cried wolf” dynamic. After being called bigots no matter what they do for 20 years, Republicans seem to have become desensitized to the point where some (at least 5%) are supporting an actual bigot.

But there is also the second, much darker and more depressing possibility. Trump might really represent where a significant portion of the GOP base is located right now. That’s what this poll from Bloomberg Politics seems to indicate: 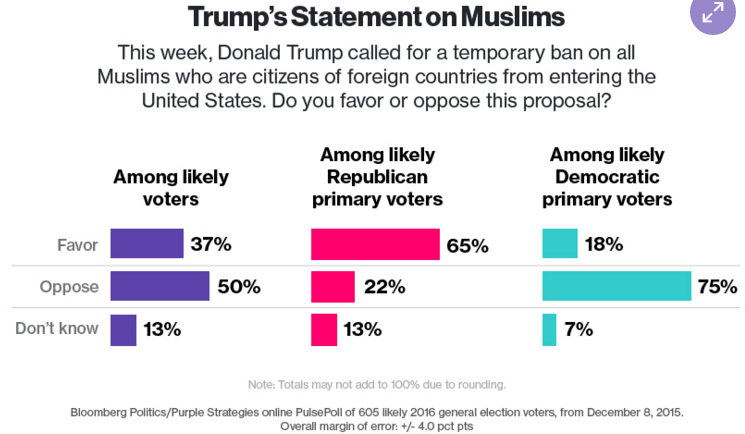 Nearly two-thirds of Republicans support Trump’s proposed ban. That is way, way more than the 5% who support Trump directly. This is a potential sign that fear is might be much more deeply entrenched in the Republican base than I would have believed possible.

I hope that this poll is anomalous. It is, after all, a single poll taken fairly recently after a terrorist attack in a highly toxic political environment about a temporary ban. I’m not defending the folks who answered in favor. I think they were wrong, and I couldn’t be more clear about that. But I’m expressing hope that this is not truly reflective of where the GOP base is at. That this poll reflects symbolic belief and/or a short-term reaction.

More polls will come out in the coming months, and we’ll also have the GOP primary to continue to keep an eye on. We will learn more. If it is an anomaly, then I have hope that the GOP voters will resoundingly reject Trump in the end. He might peel off another support to spoil the election, but if that’s what it takes to lead this specific fringe out of the GOP tent that might not be a bad thing in the end. On the other hand, if it is not an anomaly, if it reflects the long-term view of a vast majority of likely Republican primary voters, then I am very disappointed indeed. I’m with Paul Ryan: “This is not conservatism.”